Personal growth is something all Good Guys strive to achieve.

This month, we’re honoring a mover who has grown into his best self during his time on Stuart Street.

Daniel Blanchard joined the Good Guys family two years ago and he’s been making his mark since day one. 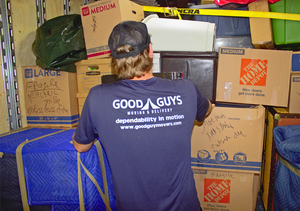 Daniel Blanchard stacks boxes inside of a Good Guys truck.

“It’s nice to see how much he’s grown as a mover and person since he’s been here,” said Accounting Clerk Clay Griggs.

Daniel has traveled across the East Coast to help folks reach their new beginning.

Blanchard has been to Michigan, Wisconsin, Florida, Virginia, and North Carolina in a Good Guys Truck.

But, his favorite move was a lot closer to home.

“My favorite move was in Ringgold, Georgia. It was from an old house to a 32-acre farm. It was favorite move because the owner let us pet her horses, see her cows, and gave me a John Deere baby swing for my son. Overall, the customer was an amazing person with a great personality.”

Blanchard said he truly values the bonds he made. 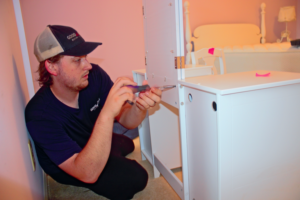 Daniel Blanchard disassembles a piece of furniture during a move.

“This place doesn’t just want bodies, they want actual people that they would call family.”

Blanchard also praised the leadership he’s received: “I do appreciate everyone, especially our managers Ricky and Edie. They have been there for me and helped me through it all.”

Outside of work, Daniel likes to spend time with his wife and their two-year-old son.

He also enjoys playing XBOX and working on his truck.

Thank you for all of your hard work and dedication, Daniel!