This month, we’re honoring one of the unsung heroes of Good Guys — a man who goes above and beyond without needing accolades.

Corey Head is our Good Guy of the Month for August.

Despite the blistering heat of a southern summer, Corey keeps his head high and helps motivate his fellow movers. 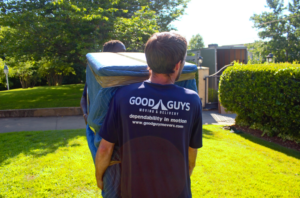 Corey Head lifts a large piece of furniture in the Woodland Height community in Chattanooga, Tennessee.

“He works a lot behind the scenes and always has a good attitude”, said Operations Manager Ricky Saenz.

After a year and a half in a Good Guys uniform, Corey has spread his wings.

He’s journeyed across the nation in a blue and white truck, taking hundreds of Americans to their new homes.

“I’ve been to a lot of jobs in Florida. Destin, Daytona, Sarasota. I love the beach,” Head said.

One of his most memorable experiences involved a special gift for someone who needed it most.

“We had a job where an 89-year-old lady was trying to pack and move herself, but couldn’t. My boss gave her the move for free. That inspired and motivated me. That is love and that is why I work for this company,” Head said. 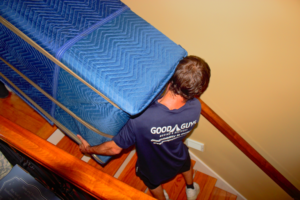 Corey Head carrying a dresser down a winding staircase.

“It’s the guys. We have good teams, good bosses. The people around here are just so much better than the last moving company I was at. They actually care about the people here.”

Outside of work, Corey stays active in the community.

He’s also raising a happy family with his wife Ashley and sons Brenden and Evan.

The entire Good Guys Family wishes him well! Thank you for being relentless in your pursuit to help others.