In five months, one Good Guy has made his mark on the company in a special way.

Johnny Hicks joined our Moving Team with a winning attitude back in March.

It took only a single month for his talent and dedication to earn him a position as Moving Team Lead.

It’s rare for a member of our Moving Team to take that next step so quickly.

Since taking the reigns of truck 37, Johnny has stood out as an example of what a Good Guy (or Gal) should be. 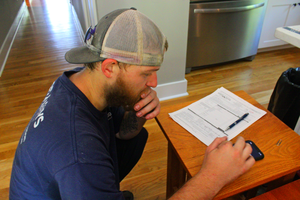 Johnny Hicks crunches numbers before finishing up a move.

Operations Manager Ricky Saenz says “You can always depend on him. He’s a go-getter who goes above and beyond.”

Brothers Michael and Seth Glover say “He learns quick. He’ a tough worker and he’s funny too.”

Johnny has already been across the southeastern United States in a Good Guys Truck, but he is especially fond of a move he made to Charlotte, North Carolina.

“Getting out of town is nice and the customers [in Charlotte] were really cool,” Johnny said.

“My favorite thing is all of the people I get to work with. You don’t see the same thing every day.”

He does still occasionally encounter a few challenges though.

“Getting some furniture through the door can be tough, a couch angled just right way — and playing Tetris in the back of the truck to make things fit.”

When Johnny is not on the job, he enjoys spending time with his two dachshund, Opie and Scooter.

His hobbies include playing pool, sports, and video games.

We would like to thank Johnny for everything he has contributed to Good Guys!